Why We Designed a Slicey Kayak.

Back in August of 2019 the Verus team attended our first (and last) Paddlesports Retailer Show.  During the three days of high-pitched chaos, networking and rumor sharing, we had a good chat with long time industry vet, Corran Addison.  To summarize what was said, we were told to ground our designs in the desires of the paddling community; to find a gap in the existing market, and craft a boat which fulfils the needs of the people.  This was good advice, as we did not want to design a creek boat in an already oversaturated market. From the rivers of our home in the Southeast we heard the one sentiment echoed time and time again. This was the need for an aggressive, modern full-slice design.

Here at Verus kayaks we cannot say that we remember the glory days of boats like the Ultrafuge and XXX.  We cannot recall the evolution of freestyle boating in the early 2000s because we are simply too young. We were too busy learning to read to notice the scene that would engulf us almost 20 years later.  As the sport changed, freestyle became specialized in spud boats, and all other kayak media focused on class V shit-running. Slicey kayaks were neglected, gathering dust in garages while we watched another Little White edit. We lost our way. You might have expected rodeo-heads to quietly suffocate in the shadows of such an impossible scene, but you’d be wrong. For those who know, slicey kayaking is the highest-caliber, end-over-end, bat-out-of-hell kind of fun a human being can achieve.

What is Slicey kayaking?

“Slicey boating” as you will hear it referred to the most, is the mixture of freestyle and river running in a low volume boat with wings for the bow and stern.  The slicey kayak will be longer than your modern playboat to facilitate speed for river running, and allow for more wing contact with the current when vertical on the bow or stern.  Cartwheels, spins, splats, blasts, and squirts are the name of the game in slicey boating.  You will often see a seasoned slicey boater radically execute a series of  tricks and spins while navigating the rapid and leaving their peers in giddy delight. Slicey boating effectively turns the river into a stomping ground of the imagination.

The end result of this type of kayaking is often loud hoots and hollers from fellow boaters, confused glances from onlookers, multiple high-fives and paddle slaps, and lies in the parking lot about how many ends they threw on their lap.

In a slicey kayak all you need is an eddyline to throw down an epic series of moves that will have you grinning from ear to ear.  It is addicting, it is pure fun.  Companies have made full slice designs since 2001, but none have owned or pushed the feeling and sparked a movement back to these designs. Now cut to the present, 20 years later, and paddlers still trade, barter and sell these classic designs in the coveted second-hand market. In the last year the Verus crew has easily broken five full slice boats from this era. While this would upset us normally, we had to understand that the kayaks are almost to legal drinking age. It’s time to give these old boats some rest, and paddle a kayak designed for the present moment.

IN COMES THE HELLBENDER.

We decided to own this style of boating because it’s what we truly believe in. It’s not going to push the extreme limits of the sport, it’s not going to be in all the highlight reels each year, but it’s going to be the most fun boat that has come out this decade.  The creekboat market is saturated, so are the half slice and the spud boat markets.  We want to give people the freedom of slicey boating in a reliable and durable package with modern outfitting that will allow us to finally retire all of these old boats that we have been paddling. We kept the aggressive full slice but decided to give it a more forgiving edge to allow for smoother, and more confident boating. At the end of the day, we wanted a boat that we could slice our faces off with. And that’s exactly what we got. So go ahead and mount that old Mr. Clean on your wall, throw that LUV onto the kayak fence you’ve been constructing for 15 years, add a Hellbender to your quiver and escape reality.

We're not around right now. But you can send us an email and we'll get back to you, asap. 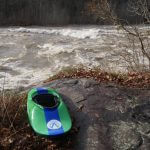